Organized by the Monetary Authority of Singapore (MAS), the Singapore FinTech Festival and the Singapore Week of Innovation and Technology (SFF x SWITCH) took place from 11-15 November 2019, which attracted more than 60,000 participants from 140 countries. The event also saw a record 569 speakers, close to 1,000 exhibitors and 41 international pavilions. The event featured the FinTech Conference with a new AI in Finance Summit and Global Investors’ Summit. There were also traditional initiatives such as the FinTech Awards and the Global FinTech HackAcelerator.

In 2018, the festival drew 45,000 participants from over 127 countries, hosted more than 250 global luminaries and 480 exhibitors. I was honored then to moderate the panel “Financial Inclusion in Africa.”

This festival keeps on growing and this year they occupied the EXPO space. It was impressive to meet the 10,000+ steps goal navigating the more than one kilometer of interior stages and exhibit spaces. Impossible to cover everything, containing larger exhibits from established players, smaller booths by startups, and even “hives” where newer initiatives by students and others can be showcased like useful technology relevant to SMEs. But, even there, I’m sure I missed far more than I saw. One booth that caught my attention was the APIX Exchange, an initiative of the ASEAN Financial Innovation Network (AFIN) , a not-for-profit entity that was jointly formed by the Monetary Authority of Singapore (MAS), the World Bank Group’s International Finance Corporation (IFC) and the ASEAN Bankers Association. It is a global, open-architecture platform that supports financial innovation and inclusion in ASEAN and around the world. This booth was mobbed the whole time through closing, when folks were still coming by for demonstrations. Bankers were also well represented on the speaking programs and more fintech’s this year were looking to connect in the public spaces.

The importance of digitalization

To open the festival, the Singapore Prime Minister visited the festival, and the Monetary Authority of Singapore Managing Director gave a heartfelt welcome speech. Although there seemed to be even more rigorous networking on the floor, perhaps at the expense of attendance at some of the stages –this wasn’t true Wednesday for the SME program of Trade Connect and Business Without Borders, which had standing room only much of the time. This is a great sign of the importance of this innovation area!
This year, I was asked to moderate the plenary session “2020: Policy Choices for the Digital Economy” on policymakers and policy issues facing financial sector innovation, on Day 1. My fellow panelists included Jane Hume, a Senator from Australia responsible for fintech legislation, Daniela Stoffel, State Secretary from Switzerland responsible for financial sector regulation, and – Saeb Eigner, head of the Dubai International Financial Center, and the former World Bank Treasurer-Head of Nigeria SEC. It was quite a high-powered group, lively, bright, and quick on their feet, and very engaging and open about both the potentials and the risks. 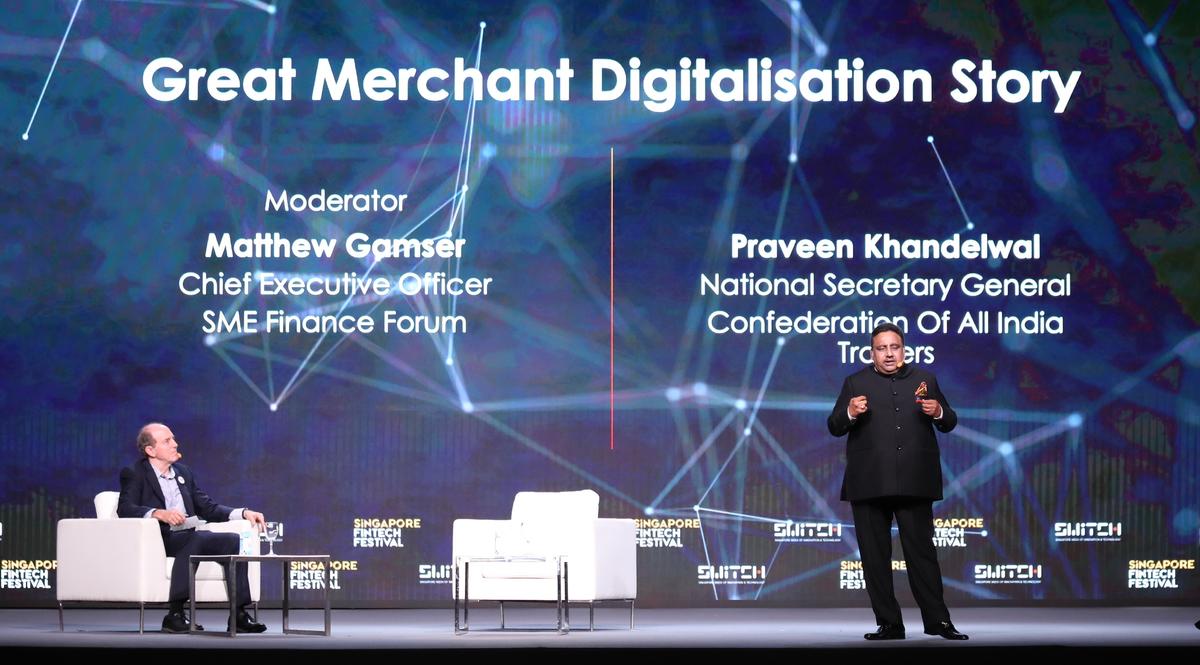 Day 3 (November 13th) had me with one “Fireside Chat” titled Great Merchant Digitalization Story”, an interview on the main stage with Praveen Khandelwal, General Secretary of the Confederation of All India Traders, representative of “only” 70 million SMEs. This followed right after one of the most important moments, the presentation “Inclusive FinTech – Our Best Opportunity to Improve Financial Lives” with keynote address by H.M. Queen Máxima of The Netherlands, United Nations Secretary-General’s Special Advocate for Inclusive Finance for Development. So, it was a time of great attention as we talked about SME digitalization and the goal of enabling new ecommerce activation in 10 minutes.

The fireside chat paved the way for a morning program in the SME stream called TradeConnect (you can have a glimpse of the event in this video), sponsored by BSB, a joint initiative of the CAIT and the Monetary Authority of Singapore to set up a b2b connection platform between the countries. With an audience of both SME entrepreneurs and more typical festival participants, I was asked to do a keynote, which focused on the challenges and opportunities of SME financing and the challenges posed by most SMEs remaining cash based, and critical technologies, particularly for cross border, being ancient (SWIFT telex, documentary trade financing a la 14th century Venice). Also, about the opportunities posed by digitalization, but getting the policies right critical.

Then I got to moderate a cool panel with friends from Microsoft, our member BBVA and Union Bank of the Philippines (a member through UBX), where they talked about how they were going beyond financing to help SMEs digitalize and connect better to finance. The rest of the morning saw other very interesting panels focused on very much our “formalization” theme from the Madrid Global SME Finance Forum 2018 conference, capped by a most interesting session with a group of successful entrepreneurs. The morning concluded with the formalization of the agreement to set up the India-Singapore BSB platform.

The afternoon saw a focus more on platforms and other structures to help SMEs, and I was asked to take on my fourth and final assignment of the day, chairing the panel ”Show me the Money: SME Financing Reimagined”, with members, Grab Financial, Standard Chartered and UBX, along with VISA on innovations on the financing side. As with my morning panel, having knowledgeable panelists made it easy. I just threw out a few basic questions, and they undertook a lively session, with strong audience Q&A (digital, of course) at the end, we had only 30 minutes, could easily have entertained and informed the audience for twice that time.

I can’t say enough how impressed I was with the young team that the APIX platform has assembled, including secondees from MAS. They were on their feet, dawn to dusk, for the entire three days, and I understand they were at close to 200 fintechs and banks signed onto the platform, despite this being the first year that signing on means agreeing to paying fees (150-160 signed on last year, with no fees). This is a great sign of the critical need for this connection service, and a sign of the wider geographic potential of the AFIN/APIX model.

Coming home with a few inches of new business card stack, lots of interest in the SME Finance Forum, and hopefully several new members, with also an invitation again to help with Afro-Asia Fintech Festival 2020, round 2, which will be in Nairobi in July, and with Singapore Fintech Festival next year from 9 to 13 November 2020.

Finally, another unexpected benefit were the random encounters, particularly on the bus commute to the EXPO, I met both the founder of WorldPay (doing incredible new things in cross-border money movement and correspondent banking, that he will share at IFC next month), and founder of Turing Machines, one of the world’s leading AI thinkers on the bus this year, among many other fascinating people.